Happy 2nd year at The Gables! 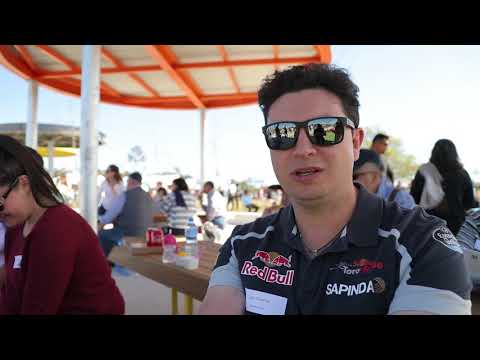 Over 1000 future residents joined The Gables team for an afternoon of family entertainment and a range of delicious food at the second birthday event on Sunday. All eyes were however on the new neighbourhood park facilities –‘The Orchard’ delivered ahead of the first residents moving in in December this year.

“We were committed to having facilities in place before the first residents move in, and it’s been great to see the future The Gables community so excited about what we have built,” he said.

An orchard themed park, chosen by the community at The Gables first birthday celebrations, is now complete. Cycleways and footpaths are also in place and the riparian corridor planting is completed.

“Our vision for this community is starting to emerge,” he said. “Future residents have been able to get a very real sense of what their neighbourhood is going to look like.”

Nicole Surma and her children, Bailley, 7 and Koby, 6, were thrilled to have the chance to play in The Orchard park.

The park features deciduous trees to let the sun through in winter and provide shade in summer. A discreetly fenced playground, complete with play equipment, water bubblers, bike racks and a ping pong table, allows for safe and worry-free play, while custom seating with shelters provides a place for families and the community to gather.

Nicole, a conveyancer who grew up in the Hills area and recently purchased her block in The Gables, said a lot of her clients, as well as her Mum and partner, have bought in The Gables.

“I love the way the community has been planned with so much open space and how residents have been included in lots of the decision making.

“We haven’t decided on a home design yet, but the kids are really keen on having a two storey house and have already picked out the beds they want in their new rooms,” she said.

With her children settled and happy in a nearby school, Nicole is excited about her future in The Gables.

While she currently works from home, Nicole hopes to eventually move her business into the future town centre.

“I have two people working with me and we're fast outgrowing my home office. I have a very clear vision of having a presence in the future town centre at The Gables,” she said.

“For me it’s all about really living and working in and for a community – I think it’s important to be part of something bigger than yourself. The world needs more of that kind of thing right now and Celestino have tapped into and catered for that in The Gables.”

According to Mr Scard, the masterplanned development will ultimately provide $315 million worth of community infrastructure, services and utilities, including 200 acres of open space, a future town centre, proposed 10 acre lake, recreational facilities and roadways, a K-6 primary school co-located with one of two sporting fields, a community centre, and eight neighbourhood parks embellished with play equipment and community facilities.

“At Celestino we are wanting to raise the bar and produce a new masterplanned community that is over and above what buyers have come to expect. We value our future residents and in the spirit of co-creation have delivered a park that we are proud of, and that we know will enrich the lives of The Gables community. Yesterday was a wonderful example of this,” Mr Scard said.